I don’t know much about Buddhism and I’m not religious, but I completely support taking parts of religious teachings that speak to you and applying them to your own life, regardless of whether or not you accept their entire doctrine. This is what I’m trying out with the concept of non-attachment.

While writing this post, I tried to find a short YouTube video to explain non-attachment. I deeply regret it. All the clips featured soft-spoken, irritatingly calm people talking about how they received a “message from the universe” or had a “shift in planetary consciousness”.

Of course they included the obligatory close up shots of cherry blossoms set to a soundtrack of tinkling bells.

If this had been my first introduction to the idea of non-attachment, my reaction would have been RUN!!!

I don’t have an aversion to Buddhists, yogis* or hippies in general, but something about their promotional material as a whole makes my skin crawl. Why can peaceful pictures of people meditating in nature make me so irrationally irritated?

Luckily, I first came across the usefulness of non-attachment in the book 10% Happier by news anchor Dan Harris. An alternative title to his book could have been The Cynic’s Guide to Meditation. He introduces meditation (and briefly, non-attachment) in a non-nauseating way, so that it’s relatable to the general population, without mention of any ‘journey’ to find his ‘spiritual practice’.

For a better sense of his style, here’s a video of him discussing some common misconceptions about meditation.

So what is non-attachment?

One of the central teachings of Buddhism is that attachment is the root of suffering. But what does that actually mean? Dan Harris summarizes it much more simply than anything I’ve been able to find online: “In a world that’s constantly changing, we suffer because we cling to things that don’t last.” 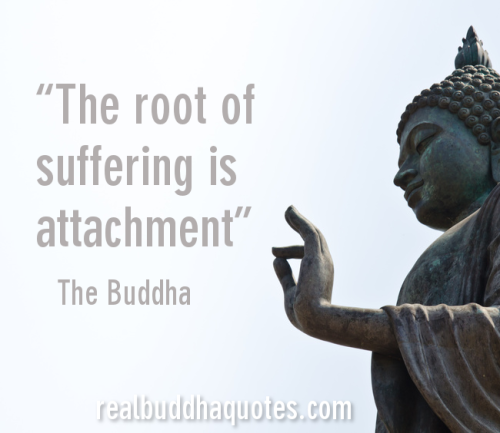 From what I understand, all non-attachment means is acknowledging that nothing is permanent and many things that happen are out of our control. It means not being overly attached, emotionally, to your expectations for the future.

“Nothing lasts-including us. We and everyone we love will die. Fame fizzles, beauty fades, continents shift. […] We may know this intellectually, but on an emotional level we seem to be hardwired for denial.” – Dan Harris

It sounds depressing, but by admitting to yourself that these things like aging and death will happen eventually, we’re better equipped to deal with them when they do happen. We’re also more likely to enjoy things in the present, if we acknowledge that they won’t last.

There’s a reason Buddhism is sometimes called advanced common sense. It’s a simple concept, but can have far reaching results.

This post is already long and, if you’re like me, you’ve already reached the limit of your attention span for reading blog articles. I’ve only scratched the surface and I haven’t provided you with anything particularly useful yet. Check back  three weeks from now for a specific example of how non-attachment shifted my perspective on dating.

*I do, however, have an aversion to the word ‘yogis’. It’s right up there with ‘kiddos’

12 thoughts on “An Introduction to Non-Attachment”